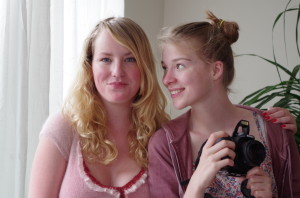 Two years ago the daughter of my friend had developed a severe scoliosis. She was thirteen at the time and had to go through a long and risky operation. She ran the risk of becoming lame and had no choice but to hope for the best. We all were relieved after the operation had turned out to be successful. But for Sarah a time of painful rehab began. She never complained and just did it.

A couple of months after the OP I was invited by my friend for dinner. Spontaneously her daughter pulled up her shirt and showed me the oblong scar on her back. It could have been the gesture or de scar itself, I don’t know, but it made quite an impression on me.

When I started off with Lena Milagros I came up with the idea of making something that would adorn this scar. Many people voluntarily are having their backs tattooed. And Sarah has this huge tattoo on her back, but not out of her own free will. Nevertheless the scar looked cool to me. Maybe because she did not hide it at all.

I started fantasizing what it would be like if she were out on the street one summer day, wearing a top with a low neckline on the back. Not some top but a top that would lead the eyes of the people to the scar. Would she dare it? Would she be proud to show it? Would people not merely see a scar but more something like a tattoo? Questions that inspired me to make the Beautiful Scar top.

Due to the delicacy of the subject it took me a while to work out my plans. First there was the basis, that wasn’t too hard to make. The top had to fit tightly around the body, in an uncomplicated cut. At the same time it had to be soft, tender and transparent. Everything in order to suggest a second skin. I used a pale blush colour from ITO Sensai. This is one of the finest yarns I know of this kind (just mohair and silk, no artificial additions).

Making the scar was more of a struggle. I only had a vague vision of how a fresh scar could look (after the surgeon had cut open the skin, pulling it sideways to give room for his hands and instruments to work on the spine. And then, after hours of concentrated work had sewn the skin back together). The problem was how to come close to what I saw with my imaginary eye. To simply knit the scar wasn’t the solution. Knitted fabric consists of countable stitches which would make it too predictable. Crocheting maybe? It certainly would offer me the possibility to form the scar stitch by stich, but I feared it would still look too orderly.

I wanted to add a touch of plasticity. Which technique could give it a less predictable and more organic look? Only felting can do that I guess. Since I am not a felting artist where was I to start? I remembered having an old jumper of exactly the right colour red in the back of my cupboard. Why not throw it with the rest of my red-orange-pink-purple laundry in the washing machine rubbing it for an hour and a half on 40 C with soap? I was lucky, it came out like a strange species of a meat eating plant. I tried to pull it in a less dense substance but it wouldn’t let me. Instead, it started to eat my fingers. Quickly I took a pair of scissors and cut it into harmless shreds.

The shreds were perfect to make the scar with. I sewed them around the neckline and down to the waist. It was already late in the evening and I went to bed with the feeling I had made a top with a trimmed neckline. Too little. No, this did not meet my vague ideas by far!

The next morning I set off to work in my studio to knit a long piece of jersey from the pale blush mohair/silk mixture which I was going to try to felt by hand to keep in control of the felting process. Felting is hard labour! You have to go through the rubbing with soap in hot water over and over again. Now mohair will not felt easily but I persevered until it showed the amount of plasticity I was looking for. Surely it would look like torn skin so I merged it with the red felt around the neckline. This time I ended up with the feeling I had made a top with a nicely trimmed neckline and lovely ruffles. Too much.

Damn, why can’t I make a fresh scar? At night I woke up knowing exactly what to do first thing in the morning. I slept like a stone. With a clear vision and an accurate hand I cut away all the trimming at the front and sides of the neckline. I transferred the ruffles into skin folds and partly closed the skin with a few rough stitches. This is as close as I can get.

You can visit Sophie’s blog